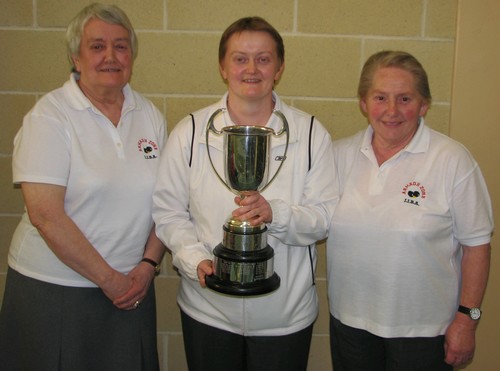 May, Pauline, Rachel
It is a rare event to have a title successfully defended three successive times and be champions for a fourth year therefore it has to be regarded as a superb achievement.
Congrats go the Cassells Crew of Rachel Cassells, May Cassells and Pauline (Cassells) Beattie who won their fourth successive ladies triples championship.
These ladies deserve more acclaim than what they have received. As a unit over a sustained period they have proved themselves to be the best. It is remarkable that they have maintained a high level of consistency to such a degree that they have not had one poor game over four years. One poor game and their reign would have ended.  No matter how tight the game or how close they have come to being knocked out they have continually coped with the pressure and delivered the telling shots.
A magnificent run.
Congrats also to Lynn Hamilton on winning her second ladies singles title and to Margaret Nelson and Esther Forster who won the ladies pairs on an extra end.
Why are the ladies results not on the IIBA site along with the national results?
It is a slight and an insult to ladies bowls that they are not given the same coverage or respect as the men. Are the IIBA inferring that ladies bowls is second rate and not worth a mention?
Posted by David D at 16:57